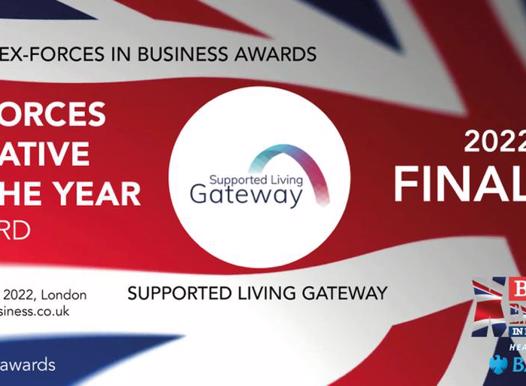 We are so pleased and honoured to announce that Supported Living Gateway has been short-listed as a finalist for the 2022 British Ex-Forces in Business Awards under Initiative of the Year.

However, establishing a meaningful second career can be challenging, with visibility of role models, and awareness among employers of the veterans talent pool, historically lacking. A third of UK hirers told a study by SSAFA they’d feel reluctant hiring a veteran, and just 48% of workers said they would feel comfortable working with a service leaver.

Depictions of veterans in mainstream media, TV, and film fuel misconceptions which create and exacerbate the challenges facing service leavers. Since launching in 2018, the Ex-Forces in Business Awards has led the way in promoting a more positive and accurate representation of veterans, as assets to employers across all major industries.

The Awards programme is also a powerful vehicle for increasing the visibility of both role models and career opportunities for veterans, and educating employers on the exceptional transferable talents among military service leavers. This year’s UK shortlist exhibits the second-career achievements of over 200 veterans and reservists, whittled down from a record-breaking 700 nominations. The breadth of opportunities available to veterans are evident through the big variety of sectors represented on the shortlist.

The Ex-Forces in Business Awards is the world’s largest celebration of military veterans in second careers. Taking place in London and Glasgow, the awards are dedicated to providing a much-needed platform for uncovering and showcasing the business achievements of ex-military, presenting them as role models to service leavers, and recognising the employers that support current and former members of the British Armed Forces. The prestigious events promote the huge value that military-gained skills and values add to the UK economy in their second careers.

The winner will be announced in September and whether we win or not, we are honoured to have been nominated.

Highlights from a talk by Christine Janaway, an experienced valuer and a fellow of the RICS.

Earlier this year we offered our Supported Living Gateway the opportunity to visit our Macclesfield project.

Factors to consider when financing a supported living lease

Navigating finance on a supported living lease can be daunting. There are several factors that will influence who will be willing to lend to you.